ANALYSIS: What’s Next for Bed Bath & Beyond After Tritton Exit? 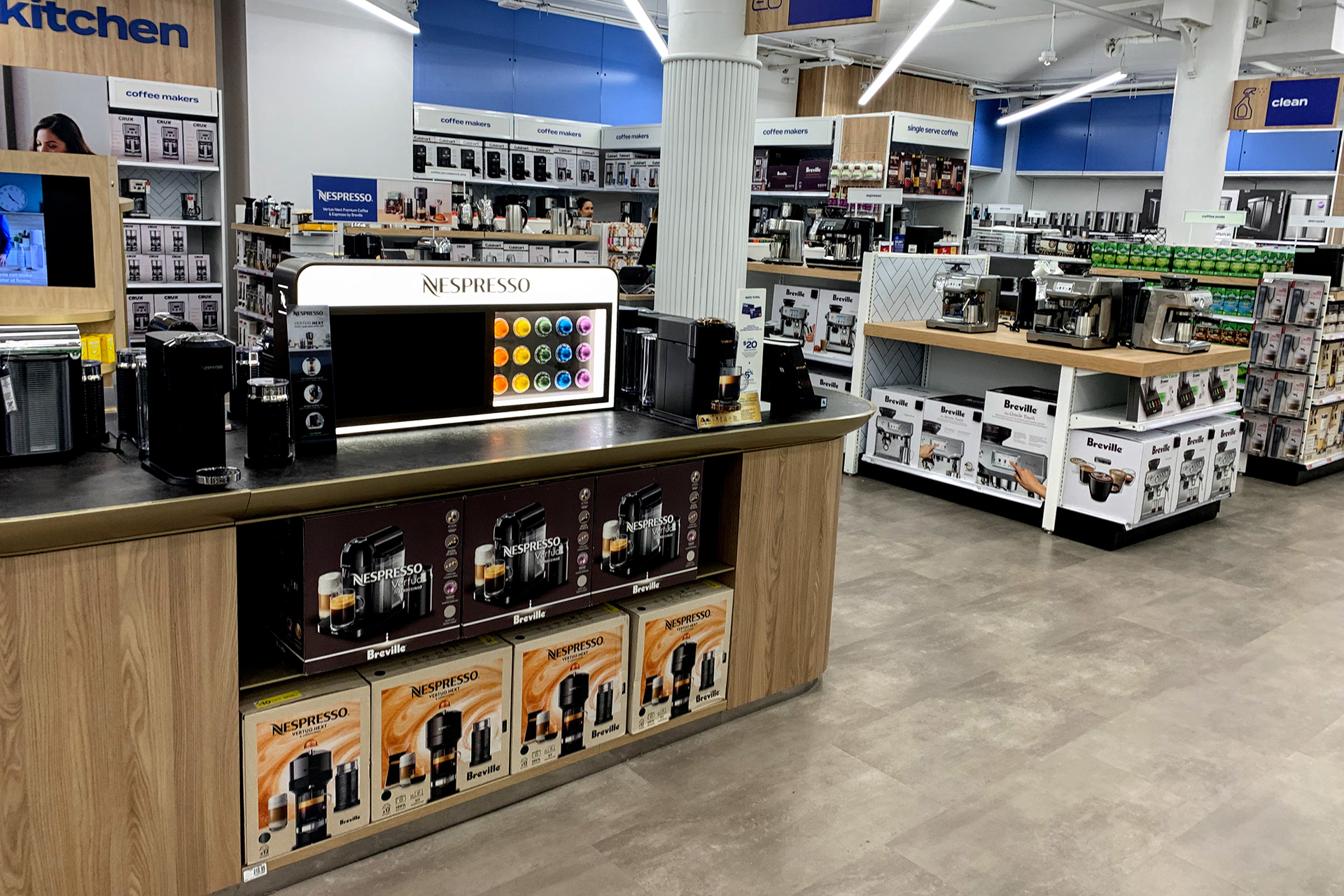 Mark Tritton’s exit from Bed Bath & Beyond after a 23% first-quarter comparable sales decline leaves a key question: What’s next for the struggling retailer attempting a full-scale transformation at a pivotal time for the home and housewares business?

Tritton in 2019 was brought in as Bed Bath & Beyond president and CEO to turn around it’s declining fortunes after a successful turn as Target’s executive vice and chief merchandising officer. At the time, Bed Bath & Beyond already was in transition mode. But the retailer’s multi-faceted initiative to transform itself into a broader more digitally driven operation with cleaner merchandising never gained traction under a regime that was still overseen by the company’s founders.

The Tritton departure follows other moves by major retailers in recent years to bring in executives who had made their reputations at Target to oversee business transformations. Ron Johnson initiated a thoroughgoing reorganization of JCPenney’s merchandising and marketing only to leave in 2013 when the transformation failed to take hold as expected. Walmart hired Target exec John Fleming who became chief merchandising officer but departed in 2010 after leading a remerchandising effort that observers at the time regarded as having an obvious Target influence but that didn’t satisfy leadership, which was changing at the time with the accession of Bill Simon to president and CEO of Walmart U.S..

Tritton changed Bed Bath & Beyond’s pile-it-high/let-it-fly merchandising strategy to a more open orientation as he expanded the retailer’s private-label mix, including opening-pricepoint items designed to build traffic, and made efforts to combine in-store and online selling to establish a more omnichannel footing for the business. Bed Bath & Beyond by many accounts was late to putting an emphasis on e-commerce sales and continues to struggle in efforts to build traction versus rivals including Amazon, which is now the dominant housewares retailer in the United States, as demonstrated in the HomePage News Top 50, with sales 10 times that of Bed Bath & Beyond despite being essentially online only in the category. Bed Bath & Beyond digital comps fell 21% in the first quarter.

Tritton also engineered the spinoff of the Cost Plus World Market and Christmas Tree Shops businesses and largely purged the rest of the chain of the specialty food and beverages business it had been building in part via the departed banners but also in Bed Bath & Beyond stores. Recent results at Target but also at Walmart noted a shift in shopper spending from hard goods to consumables and food.

The change in approach to the business, some retail observers said, blurred the line of differentiation with Target, as Bed Bath & Beyond had always been a destination for middle-class shoppers and an aspirational merchant for mass-merchandiser consumers who were ready to explore its broader and more upscale presentation of housewares and home goods. The shift to private label also upset Bed Bath & Beyond’s traditional position as a promotional seller of national brand products.

Still, Bed Bath & Beyond got an initial lift as it began instituting changes under Tritton at a time when the COVID-19 pandemic made consumers more inclined to purchase products for homes to which they were largely confined. As the pandemic waned and consumers spending on the home plateaued, Bed Bath & Beyond began to lose ground. Supply chain issues made matters worse as the company had trouble stocking merchandise in key categories then receiving too much as consumer spending shifted.

A Yahoo Finance-published analyst consensus estimate called for an adjusted diluted share loss of $1.39 and revenues of $1.51 billion.

Net sales were $1.46 billion, down 25% from the quarter a year before. Comparable sales tumbled 23% in the period year over year with 2% of the decline related to the impact of fleet optimization activity, Bed Bath & Beyond maintained.

Bed Bath & Beyond banner comparable sales slid 27% in the quarter year over year, a decline that reflected rapid shift in consumer spending patterns and declining demand in home goods sector, the company asserted.

At the same time, buybuy BABY comps declined in the mid-single digits versus the 2021 quarter although the company claimed that the banner’s market share remains stable.

Pulse Ratings analyst Dennis Cantalupo wrote in a report on Bed Bath & Beyond’s first quarter results, “While we were expecting a 20-plus percent erosion in 1Q comparable sales, the significant erosion in EBITDA and cash flow has taken a larger than expected bite out of the company’s liquidity. Since the end of the 4Q, liquidity has fallen to $900 million from $1.35 billion. As a result, we are reviewing the company’s credit rating for a likely downgrade. We view the removal of Mark Tritton as the CEO as a positive, however, any change in the executive office will create a disruption. Because of the company’s aggressive share repurchase program over the last 10-plus years, the company’s liquidity is not as strong as it could be.”

In a conference call, chair Harriett Edelman noted that the Bed Bath & Beyond strategy committee is continuing to review strategic options for buybuy Baby, which it regards as having significant value. She said buybuy Baby is “a highly relevant banner with a strong market position and favorable demographics.”

Sue Gove, a Bed Bath & Beyond independent director and chair of the board’s strategy committee, has been named interim CEO replacing Tritton and said in announcing the financial results, “I step into this role keenly aware of the macro-economic environment. In the quarter, there was an acute shift in customer sentiment and, since then, pressures have materially escalated. This includes steep inflation and fluctuations in purchasing patterns, leading to significant dislocation in our sales and inventory that we will be working to actively resolve. The simple reality though is that our first quarter’s results are not up to our expectations, nor are they reflective of the company’s true potential. The initiatives we are instituting today are just the first steps in putting our business on firm footing to drive our future success. I look forward to working with the board, the management team and our associates to immediately address our supply chain challenges, market share recapture, inventory and cash optimization, and cost structure alignment.”

In the conference call, Gove said the company is satisfied with Bed Bath & Beyond’s basic positioning and expansion of private label including opening price point Simply Essentials as well as improvement in digital capabilities such as same-day delivery, and the launch of the new Welcome Rewards loyalty program. She noted, however, that the company had immediate work to do in driving customer traffic to stores and digital platform, serving customers to recapture market share, reduce costs, stabilize the supply chain and strengthen the balance sheet. Gove said that Bed Bath & Beyond would go forward with a back to basics perspective. At the same time, she said, the company hired BRG, a retail advisory firm, to focus on cash, inventory and balance sheet optimization.

Arnal said the company ended the second quarter with a cash and investment balance of $200 million and total liquidity of $900 million. The company partially funded working capital through $200 million against a $1 billion asset-based revolving credit facility.

According to Bed Bath & Beyond, Gove has 30 years of retail industry experience in senior financial, operating and strategic roles that have included president and CEO of Golfsmith International Holdings and chief operating officer at Zale Corp.

In addition, Mara Sirhal has been named Bed Bath & Beyond executive vp and chief merchandising officer. She was senior Vice President and general manager for the Harmon division, as well as general merchandise manager of the company’s health, beauty and consumables operation. She retains her position as Harmon GM but will be additionally responsible for driving Bed Bath & Beyond’s omnichannel merchandising, planning and own-brand strategies, the company related.

Bed, Bath & Beyond Adds Stitch Fix’s Shah to Board

Tritton, Hartsig Out as Bed Bath & Beyond Continues Sales Slide